Councils ‘set up to fail’ on SEND

High needs funding for schools and colleges will increase ‘by over £700m’ in 2020-21, according to a mention in the local government finance settlement technical consultation that concludes this week.

The Department for Education, which told The MJ it ‘recently announced a £780m increase to local authorities’ high needs funding’, has also said  it will review proposals for funding  services for children with special educational needs and disabilities (SEND)  – and launch a review that would ‘take stock’ of its 2014 reforms.

The introduction that year of Education, Health and Care Plans (EHCPs) for those aged 0-25 was followed by a sharp increase in the number of those with SEND, and complaints from schools and councils about funding shortfalls and from families about delays in getting diagnoses and help.

In its own damning assessment  last week,  the House of Commons  Education Committee report on SEND concluded the Department for Education (DfE) ‘set local authorities up to fail by making serious errors  both in how it administered money intended for change, and also, until recently, failing to provide extra money where it was needed’.

But the Committee underlined that more funding would make little difference to outcomes and experiences without ‘a systemic cultural shift on the part of all the parties involved’.

It said the financial challenges had been made worse  by creating a duty to maintain EHCPs for young people until their 25th birthday,  ‘and clear problems with a lack of ownership and responsibility being taken for paying for interventions’.

The report  includes stinging criticism of the DfE, which it does not believe is ‘taking enough responsibility for ensuring that its reforms are overseen, that practice in local authorities is lawful, that statutory timescales are adhered to, and that children’s needs are being met’.

Funding has not been transferred from the adult social care budget along with the duty to support young people to 25, the report emphasised. While acknowledging the extra money provided in the Spending Review, both for schools and social care, the committee went on to say ‘nobody benefits when Departments avoid accountability and try and pass the buck’.

It recommended that the DfE, together with the Department for Health and Social Care, should ‘develop mutually beneficial options for cost- and burden-sharing with the health and social care sector’. Other key recommendations included:

Responding to the report, chair of the Local Government Association’s (LGA) Children and Young People Board Cllr Judith Blake said the extra funding for SEND services next year would help councils in meeting demand for support, ‘but we agree with the Committee that system reform is necessary alongside additional funding’.

She added: ‘We are pleased that MPs have also echoed our call for Ofsted to assess inclusion by schools….. during an inspection and hold schools with low numbers of children with SEND to account’.

President of the Association of Directors of Children’s Services (ADCS) Rachel Dickinson said children’s services were not adequately funded to meet the ‘expanded duties’ of the 2014 system of reforms – and that ‘funding alone’ would not solve the system-level challenges faced by local authorities in meeting their statutory duties.

She said these issues include a school accountability system focused on academic attainment above inclusion ‘which means some pupils with low level needs are being pushed out of the mainstream system into costlier, often independent specialist provision as well as the lack of a national workforce strategy’.

Under the 2014 reforms, local partners are required to develop joint commissioning arrangements to meet the needs of those with SEND, she continued. She said the Departments for Education and Health and Social Care should lead by example, ‘particularly in relation to funding arrangements to reflect their joint duties towards this cohort’.

Cllr Keith Glazier, children and young people spokesman for the County Councils Network (CCN), said: ‘The report calls for more regulation, and this is something that we are not averse to – however first councils must be adequately funded to deliver these services.’

He added: ‘Local authorities need more agency to develop special school places themselves to address the shortages that are increasingly occurring as the pressure on the system leads to market failure.

‘We now hope to see a long-term policy and resource solution set out by the DfE  when it concludes its review of the legislation change.’

Responding to the report, a  DFE spokesperson said: ‘No child should be held back from reaching their potential, including those with special educational needs.

‘That’s why we recently announced a £780 million increase to local authorities’ high needs funding, boosting the budget by 12% and bringing the total spent on supporting those with the most complex needs to over £7 billion for 2020-21.’

It concluded: ‘This report recognises the improvements made to the system over five years ago were the right ones, and put families and children at the heart of the process. But through our review of these reforms, we are focused on making sure they work for every child, in every part of the country.’

'A paradigm shift is what is required' 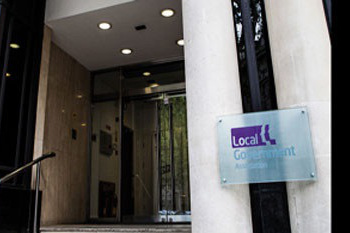 LGA gets improvement boost in a bid to aid recovery
Read More...