Using data to respond to COVID-19

As councils across Britain scramble to respond to the COVID-19 pandemic, their data will become a vital tool in fighting the impacts of the virus. The spread of coronavirus will require councils to bring all the resources and tools they have available to bear to help their communities. Data should be front and centre in these efforts.

In recent years there has been a growing and increasingly effective use of data in local government. Nesta’s research and practical programmes have supported some of this activity, notably in the emergence of a number of Offices of Data Analytics around the UK. It has shown us how data analysis can: support a shift towards prevention through predictive algorithms which can help us anticipate where problems may emerge; help councils prioritise their resources towards cases of highest need rather than simply who is at the front of the queue; and help councils to intelligently coordinate the actions of different teams and agencies.

Of course, data is already informing approaches at a national and global level such as the mathematical modelling by Imperial College and other epidemiologists. Crowd-generated data is also emerging in response efforts, being used to track the progress of the virus with King’s College London, in partnership with others, launching an app that allows people to report their symptoms on a daily basis to try and identify emerging hot spots of the disease.

So, how might local government make use of data to support and improve its own response?

We see three significant areas where data can be useful:

Much of the data that local authorities might use already exists. HackIT, which brings together the technology, digital and data teams within Hackney LBC, has published collated data on the size of various groups of vulnerable people and businesses in the borough. Their aim is to act as a central source of data both as a reference for colleagues and to avoid work duplication. Councils have also been quick to collect new data, such as Birmingham City Council who used an online survey to collect data about business vulnerability to help them shape their support measures.

There are also large sources of open data that can also be used to analyse the situation in specific locations. This data is not private or sensitive, can be shared publicly to create open maps and visualisations, and can be added to by members of the public.  HackIT created a map of local voluntary and support services allowing people to quickly access support when they were impacted. Similarly, Centre for Cities used Office for National Statistics data to map local economic exposure to Covid-19.

Finally, there are further sources of ‘big’ data, perhaps owned by private companies that local authorities could partner with to gain insights. There are important ethical and privacy concerns to navigate. But, where this data can be used with the input and consent of the public, such as by installing a dedicated app like that developed by Oxford University’s Big Data Institute, it could provide valuable information.

To be successful, local government’s data response must embrace principles of openness and collaboration. Any data models should be open sourced so they can be scrutinised and built upon. As many data sets as possible should be made open, or shared with restricted access to others where appropriate. And there would be significant value in an emergent community of practice, perhaps building on the important start made by MHCLG supporting local digital teams. Nesta’s own work with local authorities has shown us there is considerable analytical talent and capacity in councils - now is the time for it to take centre stage. 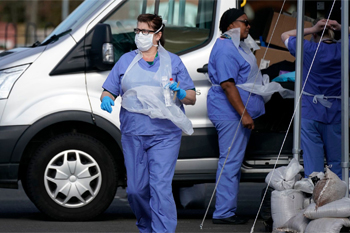